The purpose of this study was to determine the epidemiology of leptospirosis in rural areas of Ciénaga de Oro, Córdoba, Colombia, a convenience sampling was carried out on 13 farms. The sample size was 325 reproductive age cows, 11 canine samples, and 20 humans. The samples were subjected to MAT analysis with 11 serogroups of Leptospira interrogans sensu lato. Once the MAT results were received, urine samples were collected from 78 cows, along with 39 water samples, for bacteriological cultures and PCR for the 16S rRNA gene in L. interrogans sensu lato. Positive PCR samples were sequenced to determine the possible genome species. The leptospirosis seroprevalence was 74.5% in the cattle, 70.0% in the dogs, and 45.5% in the humans. Although isolation was not achieved, L. interrogans sensu lato was detected by PCR in three urine samples and in a sample of wastewater. The sequencing confirmed the circulation of pathogenic species. The high prevalence of antibodies for L. interrogans sensu lato and the molecular evidence led to the inference that the rural areas of Ciénaga de Oro are endemic and that cattle can act as renal carriers and contaminate water sources, which increases the risk of contracting leptospirosis. 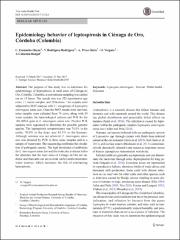